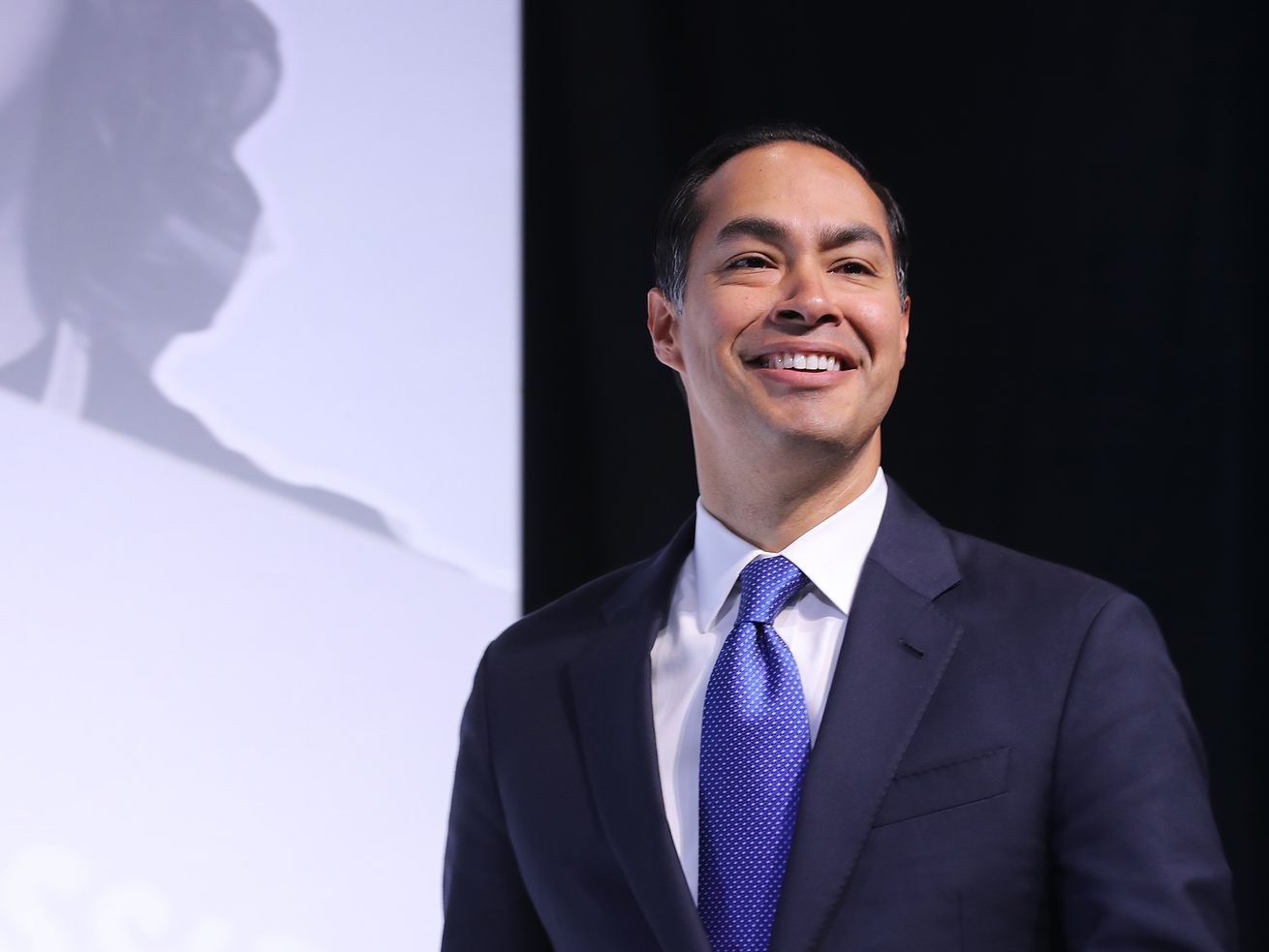 This story was originally published on Civil Eats.

The CEO of Goya Foods, Robert Unanue, ignited a political firestorm last week during a visit to the White House for the launch of the president’s “White House Hispanic Prosperity Initiative.”

“We are truly blessed to have a leader like President Donald Trump, who is a builder,” Unanue said. He went on to describe Trump in glowing terms that the president’s critics say ignore his political record and rhetoric — both of which have been linked to anti-Latinx hate crimes, xenophobia, and regulations.

That the head of the nation’s largest Hispanic-owned food company would praise the politician who campaigned on the promise of building a wall between the United States and Mexico sparked outcry from prominent Latinx figures including U.S. Representative Alexandria Ocasio-Cortez (D-New York) and Hamilton playwright Lin-Manuel Miranda. But Julián Castro, a former 2020 presidential candidate and Obama-era Housing and Urban Development Secretary, was one of the first to call for a boycott against the company, using the hashtag #goyaway on Twitter to spread the word.

“Goya Foods has been a staple of so many Latino households for generations,” Castro tweeted. “Now their CEO, Bob Unanue, is praising a president who villainizes and maliciously attacks Latinos for political gain. Americans should think twice before buying their products.”

During his White House visit, Unanue not only praised Trump but also discussed how the Goya staff “doubled our efforts” during the pandemic. Overrepresented in the food industry — particularly as farmworkers, restaurant workers, and meatpackers — Latinx Americans are contracting COVID-19 at disproportionate rates. And the virus is now soaring in Latinx-heavy states including Florida, California, and Castro’s home state of Texas, where he once served as a San Antonio city councilman and mayor.

COVID-19 has personally affected Castro, claiming the life of his stepmother last week and infecting his father. He and his twin brother, U.S. Representative Joaquin Castro (D-Texas) haven’t hesitated to criticize Texas Governor Greg Abbott’s handling of the pandemic or to point out the large number of people of color dying from COVID.

Civil Eats spoke with Castro about COVID-19’s impact on vulnerable populations, his call for a Goya boycott, his advocacy for labor rights, animal rights, and universal school lunch, and his thoughts on climate justice and factory farming reforms.

What prompted you to call for a Goya boycott, and what’s your response to Unanue’s assertion that the boycott is a “suppression of speech?”

When he said our country is “truly blessed” to have Donald Trump as a leader because he’s a “builder,” he was offensive because Donald Trump has been spectacularly terrible. Trump has built his political career on scapegoating and attacking Latinos. It felt like betrayal from a company that has gotten wealthy primarily off of Latino consumers. And we live in a time where if corporations are going to play politics, contributing to political candidates and standing with a bigoted president at a campaign-style event at the White House, then they should expect that consumers are going to react to that.

I know some have suggested that calling for consumers not to buy Goya products is a suppression of free speech, but free speech works both ways. Goya and their CEO have every right to support whomever they wish, but each consumer also has the right to make a purchasing decision however they wish. And people decide whether to purchase a product based not only on how good your advertising makes them feel, but also on how your embrace of a bigoted president like Donald Trump makes them feel.

At the White House, Unanue discussed how Goya employees have worked consistently throughout the pandemic, even doubling their efforts, bringing to mind the predicament of the nation’s food workers, farmworkers, and meat packers. We know that people of color are overrepresented in the food industry, making them more susceptible to contracting coronavirus. What should be done to keep them safe?

Food workers have absolutely been some of the heroes of coronavirus. They’ve also been many of the most vulnerable, and we need to fix that. It’s time for workers throughout the food service chain to get paid what they deserve, to get the kind of health care that they deserve, and to get workplace protections that keep them as healthy as possible. And, right now, our country’s failing on every score. It’s why we need to raise the minimum wage, including for farmworkers. We need to offer universal health care and make sure that businesses are responsible for keeping, not only their customers but also their employees, safe from the coronavirus.

You’re married to an educator, so I also want to ask you about reopening schools during this pandemic. Those who want schools to reopen argue that they provide stability, routines, and, of course, learning opportunities for students. In addition, they note that kids depend on them for lunch.

I have an 11-year-old daughter and a five-year-old son. Like most parents, I’m torn, because I know it would be better for their education for them to be in the classroom. On the other hand, I want it to be healthy and safe. I think that school districts should have the opportunity to offer a traditional learning environment if they meet certain safety standards, but I don’t think they should be required to reopen because there are likely school districts that just can’t meet basic standards or won’t have time to by the middle of August or the beginning of September. Frankly, right now, my wife and I are still thinking through whether we’re going to have our kids back in a regular classroom setting in August.

We need to make sure that no child goes hungry in this country, and school breakfast and lunch are a very important part of that. I’m proud of the effort many school districts have made to have breakfast and lunch, or at least lunch, still made available for kids even when they’ve been out of class during this pandemic. Ultimately, however, the fact that so many kids have to rely on getting a meal in school is a failure of our country. That’s why we need to invest in all of those things — universal health care, affordable housing, better job opportunities, better educational opportunities — to improve economic mobility and quality of life in the 21st century.

Unionization is one way U.S. workers have achieved a higher quality of life. You have supported strengthening protections and encouraging union participation for vulnerable categories of workers, particularly farmworkers, domestic workers, and trade unions. What do you think needs to be done to protect farmworkers during COVID?

Farmworkers have not been treated like other workers. They were left out of minimum wage standards. They continue oftentimes to work in bad conditions with inadequate facilities and, sometimes, not enough access to water and other basic necessities on the job. Whether it’s farmworkers or meatpacking plant workers or other vulnerable workers, we need to make sure that people are paid at least a $15 minimum wage, that they have good healthcare benefits — so that their health care is no longer tied to their employment — and they’re able to join a union. That means administrative rules that foster union membership instead of undermine it. It means passing things like the PRO Act that would make it easier for people to join in, and then rolling back some of the attacks on union membership, like we saw in the Supreme Court in terms of public sector unions.

As a presidential candidate, you devised an animal welfare plan that aimed, among other measures, to reform factory farming. Where do you stand on recent efforts by Senators Cory Booker and Elizabeth Warren to ban factory farming?

Across the board, Americans are paying more attention to animal welfare, including the food industry, and that’s a good thing. Because of the leadership of Senator Warren and Senator Booker and many people, I’m glad this issue is getting more traction now. When I was campaigning in Iowa, I would often hear concerns about factory farming, about the environment, about the animals. It really is ripe for reform.

Factory farming contributes to climate change, and you have endorsed the Green New Deal to tackle climate change and economic inequality. Why is climate justice an issue that should particularly concern communities of color?

As former HUD secretary, what are your concerns about housing insecurity and homelessness during the pandemic, and how these problems intersect with other issues, like food insecurity?

We’re staring down a homelessness crisis like we’ve never seen before. By one estimate, about 20 million people could face eviction over the next eight weeks. Now that means that a lot more people will be on the street. It means that we need to make a big investment immediately in rental assistance and also extend an eviction moratorium nationwide and stop mortgage foreclosures to stabilize families to help them get through this time period.

As people have gone on the unemployment rolls and their income has dwindled, there’s greater housing insecurity and food insecurity. Food banks across the state of Texas, for instance, have been inundated with families who need their help, including a lot of families who are going to a food bank for the first time. In my hometown of San Antonio, they went from serving about 60,000 families in a week to 120,000 right away [when the pandemic hit the U.S.]. And that’s a common story at food banks across the country.

In so many ways, what we’re witnessing now is a culmination of underinvestment in people throughout the decades. And if there’s an alarm going off about anything, it’s that we need to change course in this country and recognize the investments we should be making in housing, food security, job opportunities, and healthcare to create a stronger safety net and a better quality of life, permanently, for people.

To all chefs the chefs of Reddit . I need help how do you handle cuts

Before you become chef you have to get past this stage