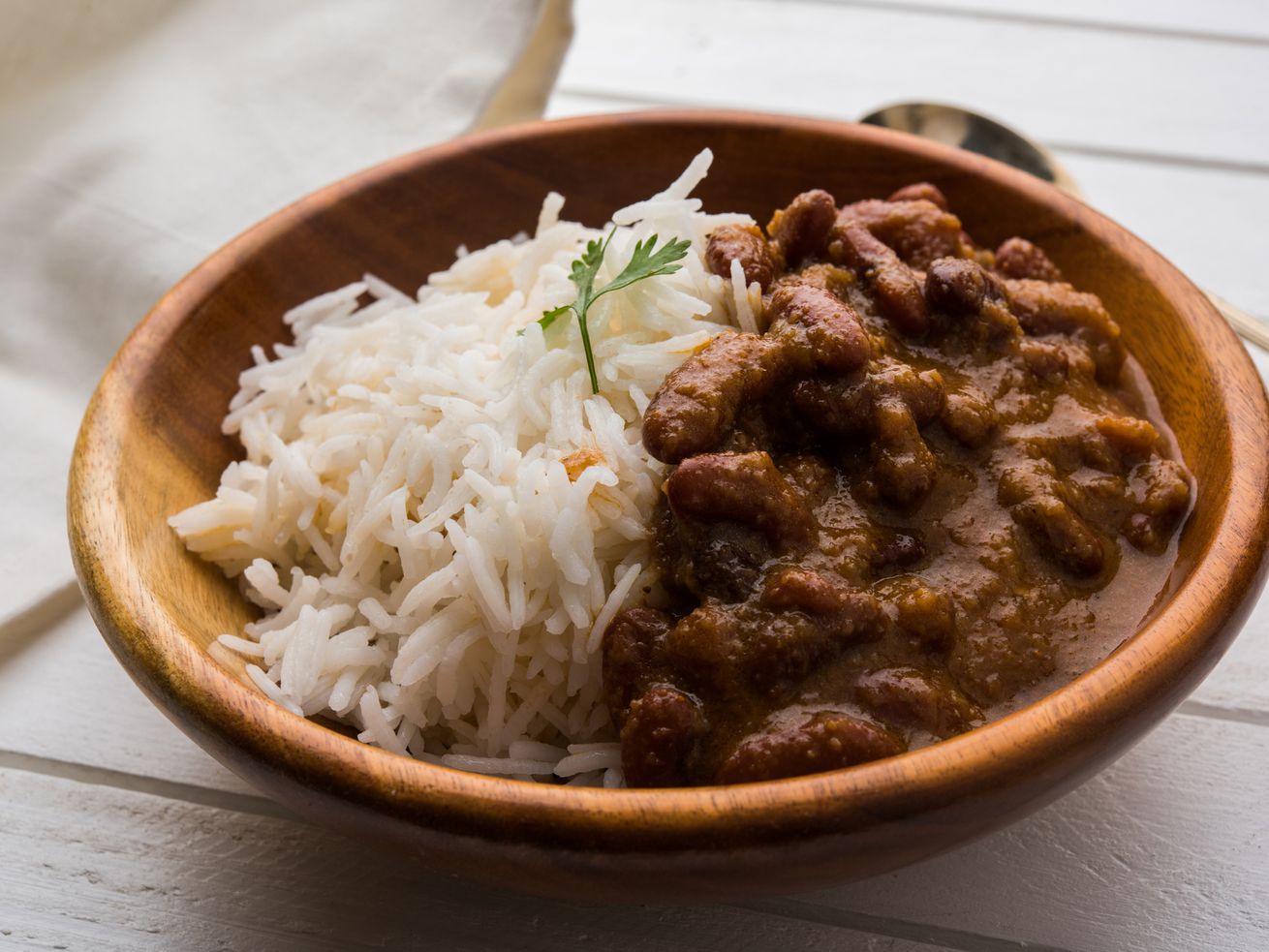 The north Indian kidney bean curry is a dish that forgives you if you do not have all the spices, and rewards you for patience and generosity

In the first few weeks of sheltering in place, I found a packet of old rajma in my pantry — that is to say, I stumbled upon a small treasure. Strictly speaking, it was an American brand, so the label on the bag read “kidney beans,” but their magic was the same.

I soaked them overnight and they bloomed into large, toothy beans already splitting at the seams. Boiling them turned their surrounding water brown and thick; I cooked them with onions, tomatoes, and whatever spices I had, and simmered it for hours, using the liquid from bean boiling to thicken the mix. In the end I had made the perfect dish of rajma masala — a rich North Indian kidney bean curry — even if it took me two extra hours of simmering, since I didn’t account for the added cook time for old beans.

Like so many of the world’s recipes that rely on hardy pantry staples, rajma masala is an ideal pandemic dish. You can turn to it when grocery runs are limited and time at home abundant. Its base recipe demands largely shelf-stable ingredients, and like the various bean chili riffs of the Americas, is a soothing comfort food for those who grew up with it. (To New York Times restaurant critic Tejal Rao, rajma masala is “her family’s store-cupboard comfort food” and the “indisputable king” of bean dishes.) Also like chili, there’s an acidic tomato base to cut through the bean’s inherent creaminess, and though it’s heavily spiced, it is a dish that forgives you if you do not have all the spices, and rewards you for patience and generosity.

“The beauty is that it is not instant gratification,” says Oxford, Mississippi-based chef Vishwesh Bhatt, who makes batches of Louisiana red beans to share with his neighbors. “Beans and rice are universal comfort foods, communal, big pot dishes— they lend themselves to sharing.”

After I posted photos of my own rajma masala efforts to Instagram, friends, both South Asian and otherwise, slid into my DMs to ask for the recipe and tips. Similarly, when food writer Priya Krishna posted a photo of her rajma chawal — rajma masala with rice — 10 people responded immediately, and more the next day, telling her that they too had been making rajma at home. Krishna, who grew up eating rajma, had cooked it with her mother while sheltering in place with her family in Dallas, but notes, “I hesitate to call what millions of people do everyday a trend.” Fair point.

It is true that what seems remarkable in the diaspora is not really so remarkable in the subcontinent. Would anyone in India really care that anecdotally, about 20 people also made rajma masala the same day that Krishna and I did? While I had finished the bulk of this essay before Alison Roman’s comments about two Asian women’s business endeavors kicked up a storm in food media, I am finishing it in the aftermath. It is true that writing about food is a fraught endeavor that skirts appropriation and neocolonialism — that often, food personalities exploit other cultures and their own. Exotification is, after all, an orientalist, capitalist ploy. And in learning more about the rajma bean, I have uncovered another complication in my notion of what is traditional desi, or Indian, cuisine, and — as an Indian immigrant to Turtle Island, another reason to honor the ancestors of this land.

Rajma masala may taste and feel like an ancient Indian dish, but its past is marked by cultural and colonial exchange, its recipe scarcely older than my grandfather. While rajma masala is a modern icon of North Indian food, the bean itself is not indigenous to the subcontinent, and neither is the dish’s base, tomato. “Ingredients that seem to many to be inextricably part of an Indian diet are not always autochthonously Indian,” writes historian Anita Mannur in her 2010 book Culinary Fictions: Food in South Asian Diasporic Culture.

The kidney bean originates in the Americas, with sources pointing to Mexico and Peru. The bean journeyed from the New World to the Old, and then onward through the spice trade routes to Asia, in what is known as the Columbian exchange, where beans and other plants and animals and peoples and information and diseases were passed between continents in the 15th and 16th centuries. “We think we’re globalizing now, but look to the 1500s,” says Mannur, who co-edited Eating Asian America: A Food Studies Reader. “The irony is that in looking for India, Columbus bizarrely transformed the Indian diet.”

The bean’s beneficial properties as a nutrient-dense dried protein source, Mannur tells me, made it a good food for long nautical journeys. Portugal’s ships, filled largely with degredados — convict exiles who often died of dysentery and typhoid along the spice route, and were promised one chest worth of expensive spices to take home if they made the journey — arrived on the western coast of India. Goa, which became Portugal’s capital in India in 1530, was a hub for much internal trade — and was how the tomato and chile pepper took root in Indian cuisine.

It is possible that the bean made it up through the cattle caravan routes to the Mughal Empire in the north — but the recipe for rajma masala doesn’t really crop up until as recently as around 130 years ago, says culinary archaeologist Kurush Dalal. Dalal thinks it’s unlikely the kidney bean was traded by the Portuguese, even if they ate it themselves, because it is not mentioned in medieval Indian texts.

“There is evidence that the French brought the rajma bean from Mexico to Pondicherry,” he tells me, calling the French the “best conduit.” The French, who colonized Pondicherry on the Eastern coast of India, had mounted the Second French Intervention in Mexico in the 1860s, spearheaded by Emperor Napoleon III. (Cinco De Mayo celebrates the day the French were defeated by the Mexicans in 1862.) There is no paper trail of how it ends up in the hills of the North — though logically, it makes sense for the hearty bean to become more popular in cooler climates, where one would burn more calories. In the wetter, hotter south, such a bean would throw off the Ayurvedic energies of vata and pitta, Dalal speculates.

Rajma masala, which made a place for itself in North Indian cuisine, is not as popular in the South. Mannur remembers being told at a restaurant in Mangalore — another erstwhile Portuguese capture — that the North Indian thali was unique because it featured rajma masala.

“Methods of preparing rajma masala are not too different from how Latin Americans made chili,” says Mannur. Like Goan vindaloo, which retained both its Portuguese name and the foreign ingredient of vinegar, rajma masala folded in local ingredients like its spices and the Asian-origin onion, but kept its base of tomatoes and chile peppers, imports from long ago.

Of course, the bean’s entree into the international plate was accompanied by pandemics brought on by Columbus and his ilk, who pillaged the global south, devastating populations and colonizing them along the way.

And this is where a cruel mirror image emerges: A few hundred years ago, millions of Indigenous people died after European contact brought with it an onslaught of new diseases, then departed with native foods, including beans. Now here we are again in the midst of another pandemic, hastened and marked by irresponsible tourism, largely impacting vulnerable populations, especially Native Americans for whom “disease has never been just disease.”

Food exchange has historically been a story of carnage, and the hegemony established continues to benefit from these massacres that unwittingly introduced foods like beans to the world.

Beans that we’re now all staring at in our pantries, wondering how to best cook. Rajma masala came together on the other side of the world — to cook the beans in their “land of origin” feels like a nod to its history. Here, then, are some tips on how best to cook these lovely, storied beans.

How to Make Rajma Masala

Red kidney beans are available at most grocery stories, whether canned or dry. Buy some onions and tomatoes (or tomato paste) while you’re at it. Cilantro leaves will brighten your finished dish. Check your pantry for the usual suspects: chiles, garlic, ginger, cumin, cardamom, cinnamon, bay leaves. If you’re missing any ingredients, or just want to punch up the flavor, the easiest cheat is to buy garam masala — well, the actual easiest would be to buy some rajma masala powder.

“Not all beans are created equally,” says molecular biologist and food writer Nik Sharma. Rajma is a fatty bean, while the chickpea is both fatty and carby — these properties affect how you cook a bean. And while it’s a beautiful thing that the kidney bean can sit on a shelf for a year and still be delicious, the older the bean, the longer it takes to cook. “The skin contains magnesium and calcium,” which create water barriers. It holds in itself pectin, the same tough ingredient that makes jam gel together, and the calcium makes it insoluble.

If you’re using dry beans, you’ll have to soak them. Mannur cautions that faster processes may reduce some of the nutrients. She soaks beans overnight — “My mother was right, but I’ll never tell her.”

Not all food legends are true. For example, we’re told that we must shave off the foam buildup from boiling beans because that foam contains whatever makes you gassy. Sharma, whose book The Flavor Equation will come out this October, says that this is a common misconception. The foam does not make you gassy; improperly cooked kidney beans do, though, if the complex carbohydrate does not break down. The precipitate is removed during the canning process, he says, so you don’t get it confused with bacteria — “it’s not poisonous itself, it’s just quality assurance.”

And Sharma has a secret that he’s willing to share as a tip, and it’s baking soda. “I did an experiment,” he says. Adding baking soda to boiling water and beans cut down the cook time from 4 hours to a mere 30 minutes.

Step 4: Make the Base

“You cook the masala with tomato and onion until the fat separates,” says Sharma, and know that canned tomato is chemically different from fresh tomato, that its acids and sugars have changed in the canning process — so start with fresh tomato, and judiciously add canned slowly, tasting every time. The rest (the spices, that is) is tweakable. I like to use garlic, ginger, cumin, red chile powder, a bit of garam masala, cardamom, and cinnamon.

Hopefully your beans are cooked, somewhere between al dente and exploded. Throw them into the onion-tomato base and add the leftover bean water. I did this gradually. It renders a much thicker base than if you were to use water. Simmer for 20 minutes, checking for consistency. It should be thick and stew-like, not dry or watery.

Serve it to yourself with rice. Squeeze a bit of lemon to cut the richness, and sprinkle on some chopped cilantro for sparkle. Or better yet, take a page out of Vishwesh Bhatt’s book, and make a ton. Separate the servings into jam jars. Leave them on your neighbor’s doorsteps as a contactless embrace and a reminder of the bean, its story, and how far it traveled.

I just watched The Final Table on Netflix

After Aunt Jemima, Uncle Ben’s, Cream of Wheat, Mrs. Butterworth’s May Be Next to See Changes

There’s No I in Jam: Sqirl Wrestles With the Sticky Question of Who Really Owns a Recipe